Workspace by and for Women Opens Doors in Sag Harbor

By Johnette Howard / Originally posted in the East Hampton Star 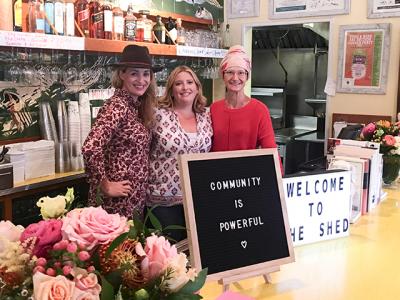 Amanda Fairbanks, Liza Tremblay, and Sarah Cohen are co-founders of the Shed, a new shared workspace for women at Estia’s Little Kitchen in Sag Harbor on Tuesdays starting next week.

The seed of the idea for the Shed — a new, shared workspace run by women, for women, which launches Tuesday in Sag Harbor — began serendipitously.

Sarah Cohen, a Sag Harbor resident, was scrolling down her Facebook page last winter when she saw a San Francisco Chronicle article that a friend, Amanda Fairbanks, had written. It described a shared business networking and cooperative workspace in Mill Valley, Calif., where Ms. Fairbanks, her husband, and two children were living.

“Sarah reached out to me and said, ‘Oh! This is exactly my life!’ ” Ms. Fairbanks said Tuesday. “I was describing this sort of frenzied working woman dropping her young child off at school, needing a place to work but not having Wi-Fi, not having a desk, living this mobile existence, trying to download a Google spreadsheet in her car, not having a place to print it. All these things. And Sarah said, ‘Wouldn’t it be great if we had something like this on the East End?’ ”

And that’s how it came to be that next week, with the help of a third co-founder, Liza Tremblay, and their social media guru Christina Martin, the Shed will launch, providing the first of its 10 a.m. to 4 p.m. Tuesday sessions at Estia’s Little Kitchen in Sag Harbor, which will close to food customers for the day.

The co-founders say the mission driving the Shed is straightforward: There’s a need. According to the latest census, there are more than 1,000 self-employed women on the East End. The co-founders say many of them can’t afford commercial rents and so they work in coffee shops, at home, or in isolation, and sometimes even on the run behind the dashboards of their cars.

At Estia’s, the Shed will provide work tables, Wi-Fi, and a printer and scanner, along with an environment where working women can not only work, but gather to talk, think, brainstorm, network, support, and empower one another. Coffee, tea, and water will be free.

“There have been men’s-only places since the dawn of time, but this idea of women coming together,  and not having it be a social club, but having it be a place where women are working, is sort of a 21st-century phenomenon,” Ms. Fairbanks said.

The launch day on Tuesday is free. Going forward, memberships will cost $75 a month or $25 for a single, drop-in day. Unlike some other co-workspace or business networking groups, there will be no vetting. All women are welcomed. The Shed’s founders hope to add events as the group grows, perhaps expanding with speakers on Mondays or occasional Tuesdays. Someday the founders hope the Shed will own its own space.

“We want it to be accessible, af­fordable, and community-driven,” Ms. Tremblay said. “That’s very important to us.”

Ms. Fairbanks, 38, is a journalist who is writing a nonfiction book called “The Lost Boys of Montauk” about four local men. Ms. Tremblay, 38, and her husband, Joe, recently announced the closing of their restaurant, Bay Burger, after 12 years, as well as their Joe and Liza’s ice cream business.

Ms. Cohen, 43, who has a doctorate in physical therapy and works as an adjunct professor at Stony Brook University, most recently designed and launched Stony Brook Southampton Hospital’s Center for Parkinson’s Disease. Like Ms. Fairbanks and Ms. Tremblay, she is the mother of two young children. She said she had already experienced firsthand the Shed’s potential as a meaningful place in women’s lives, albeit for an unanticipated reason. In March, as she was helping plan the Shed, she was diagnosed with breast cancer.

“It’s been an incredibly intense personal journey for me,” Ms. Cohen said, “and it has been such a source of strength for me, too, that’s kept me engaged and strong and optimistic and moving forward with this idea that I believe so strongly in, with my partners. I’ve been very grateful for them.”